Abstract: Steel Principles - Processes - Techniques: The article gives a detailed introduction to the methods of sintering production operations such as stable water and carbon, reasonable use of wind, low carbon and thick material, and good sintering and cooling. 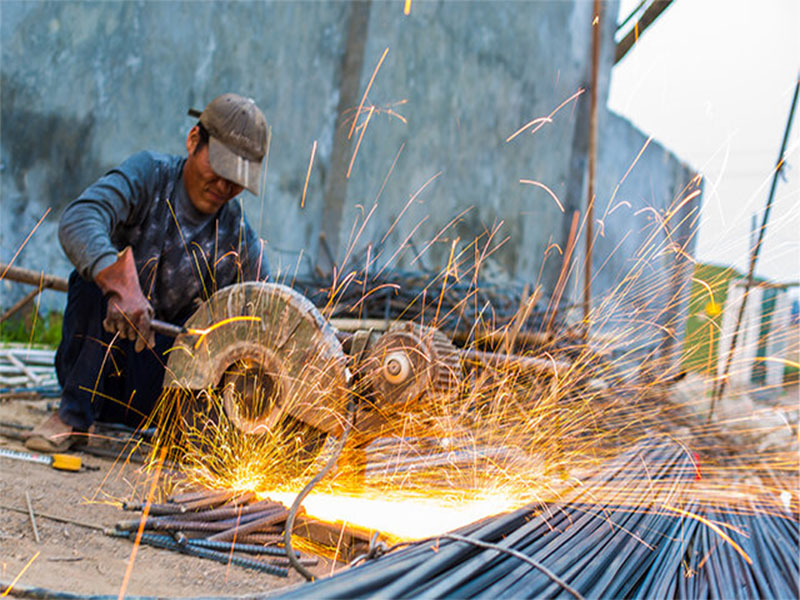 2. "Reasonable use of wind" operation

In the whole sintering process, the head of the sintering machine should use less wind to avoid premature compaction of the mixture and affect the air permeability, the middle of the wind volume should be large to increase the vertical sintering speed, and the wind volume at the end of the machine should be appropriately reduced to prevent burning the grate of the car. Specific notes are as follows.
(1) The thickness of pavement bottom material along the width of the bogie should be uniform and consistent, and no pavement bottom material operation is allowed. If the material is found to be in deficit, immediately contact with the ore trough to adjust the amount of paving material to be fed, and when there is no paving material, immediately stop the machine and report to the superior.
(2) The opening of the mud roller gate should be consistent, the material surface of the dolly should be flat, both sides of the dolly should be laid tightly and slightly higher than the middle. No pulling ditch, loss of material, empty dolly, found partial loss of material, empty dolly, immediately identify the cause, timely processing. If there is an empty dolly, the airbox gate should be closed in time.
(3) at any time to destroy the cracks in the material surface of the dolly due to shrinkage.

The operation of “low carbon thick material” is an effective measure to improve quality and reduce energy consumption.
(1) Strictly control the operation of the ball plate, to ensure the particle size of the mixture ball, improve the permeability of the material layer, so as to improve the thickness of the material layer and increase production.
(2) Control the fuel ratio, the higher the material layer, the lower the ratio.
(3) To ensure the normal use of the loosener, as far as possible to give full play to its effect.
Requirements for the loosener.
a. The loosener should be intact and in good condition.
b. Use the downtime to clean up the accumulation of material on top of the loosener.
When the sintered material particle size, material temperature, moisture, fixed carbon and other factors affecting permeability do not fluctuate much, fixed material layer thickness should be adopted and other operating methods should be adjusted.

4, "burn through the cold good" operation

The operation of “sintering through cold well” is the purpose of sintering production, and is a powerful guarantee for the production of high-quality sintered ore.
(1) According to the main parameters of the production process (exhaust gas temperature and negative pressure, etc.), accurately judge the end point of sintering and the end point of cooling.
(2) The sintering end point of 52M2 sintering machine should be controlled at No.12 air box. To ensure the cooling effect and sintering quality, the sintering end point is not allowed to move back more than No.12 air box.
(3) The exhaust gas temperature of the hot flue should be controlled within the range of 80~150 degrees. An appropriate increase in the flue temperature is conducive to the normal use of the main exhaust fan.
(4) Strictly control the machine speed of the belt cooler to ensure that the material layer of the belt cooler is evenly distributed on the dolly, and no out pile or empty block is allowed.
(5) Ensure that the air box of the belt cooler is smoothly flowing and that the ash is released in a timely and effective manner.
(6) To ensure that the material layer on the belt chiller has a certain height, generally should maintain more than half of the material on the dolly, so as to press the wind and maximize the utilization rate of the wind.
(7) machine speed adjustment should be carried out slowly, not too fast. Each adjustment range generally does not exceed 0.2m/min, and the interval between two adjustments should not be less than 30min.
(8) In normal production, use centralised chain operation, and in case of centralised chain failure, use local chain operation. Non-interlocking operation is generally used during the test run.